David Granados (1985, San Salvador) is initially a painter, even though he makes collages, assemblages and installations. His work is created spontaneously and organically, from an urge to process what is in and around the artist's studio into small and larger painterly collages. He cuts, tears, pastes, staples ... fragments from reality - magazines, posters, pieces of cardboard, wood, mesh ... on canvas or paper or wood. He adds brush strokes, paint splashes, spots, layers and planes, monitors spatial distribution on the canvas and creates effects that suggest depth and intensity.

In the presentation of the work, however, he goes a step further and realizes, as it were, a three-dimensional version of his painting. Due to the complexity and multiplicity of materials used, overlaps, fragmentations, color spots and planes, bold constellations arise in which the artist creates great freedom for himself. Despite the artistic risks he takes , he manages to keep his world in balance. The resulting images are double: it often seems as if they have stopped or are about to be set in motion. 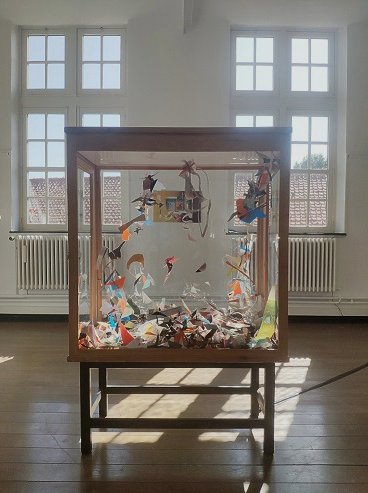